So it's Monday, just shy of 4 pm, and I'm still in my pj's.  The weather outside is frightful -- the dogs don't even want to go out there kind of frightful -- so what's a gal to do but hunker down in some comfy jammers and hang out?

I finished up my Fireworks quilt top and it turned out really well: 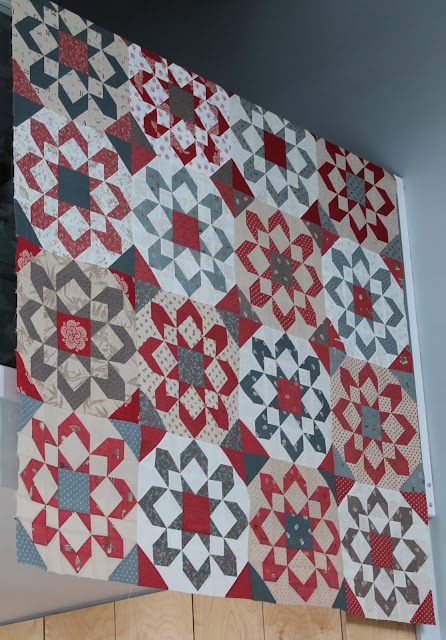 I realize that there's a concentration of light backgrounds in the upper left part of the quilt top but when you're going for random, that kind of thing is going to happen.

I remember a long time ago when Bob Vila was still hosting This Old House.  He made a comment about randomness that has stuck with me to this day.  Some one was trying to lay down those tiny hexagon white bathroom tiles on a floor and they wanted to randomly scatter black hexagons through out.  Bob picked up a handful of pennies, tossed them in the air, and told the tile layer to insert a black tile wherever a penny landed.  The tile layer pointed out that some of the black tiles were closer to each than some of the others and he started to move them around.  Bob stopped him and said "if you move them, it's no longer random".

I try to remember that when I'm fussing around with quilt blocks too much.  As long as I don't see a "big pile of pennies" anywhere, I try to let them fall where they may.